This is fun to watch 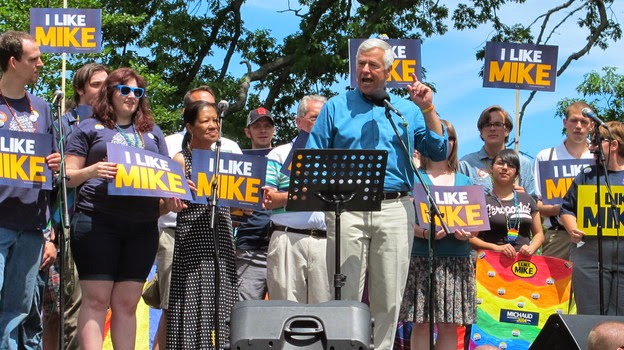 Congressgay Mike Michaud was honored recently.  And Eliot Cutler is beside himself.  Angry.

In this NPR story Cutler whines about Michaud being honored at the sodomy parade in Portland last month.

Cutler believes that this is a matter of principle.

Referring to the 19 times Michaud voted for common sense by voting against "gay" rights while serving in the Maine Legislature Cutler says, "That was a moment, those were 19 moments, when principle was important and he voted no."

He is right that this is a matter of principle.  The principles of both Michaud and Cutler are, however, perverted.
I'm not trying to be mean.  Heaven forbid.  I'm telling the truth.
Here are some of the real principles at issue in this very gay debate.
Leviticus 18:22 KJV
Thou shalt not lie with mankind, as with womankind: it is abomination.

Genesis 19:24 KJV
Then the Lord rained upon Sodom and upon Gomorrah brimstone and fire from the Lord out of heaven

Matthew 11:24 KJV
But I say unto you, That it shall be more tolerable for the land of Sodom in the day of judgment, than for thee.
Ezekiel 16:49 KJV
Behold, this was the iniquity of thy sister Sodom, pride, fulness of bread, and abundance of idleness was in her and in her daughters, neither did she strengthen the hand of the poor and needy.
This last observation by the prophet Ezekiel is most instructive.  We all know how proud they are.  They label their parades with the word.  They demand that we learn all about their pride.
They are proud of their "fullness of bread" and their "abundance of idleness."  And sodomy does absolutely nothing to help the poor and needy.  Their sexual practices bring death, not life.
Mainers know this, and they are concerned about these principles.  The privacy of the voting booth and the perverted principles of Cutler and Michaud will propel Paul LePage to another four years in the Blaine House.
Posted by Rev. Michael S. Heath at 8:07 AM