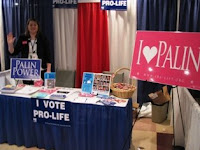 I just took a walk through the Exhibitor area of the Values Voter Summit. I found a booth that was playing up the Palin Vice President pick. The pro life Susan B. Anthony group is handing out bumper stickers and lapel stickers.

Sarah Palin is in Alaska seeing her son off to war. He is going to Iraq as a soldier. She won't be speaking at the Summit.

Paulie and I will bring Palin stickers home to Maine. I checked with the Maine Republican office last week. They didn't have any signs or stickers.

Evangelical left leader Jim Wallis is arguing that the Democrat Party's, and Barak Obama's, position on abortion is more pro life than the Republican position. Even though the Democrat Party removed the word "rare" from their famous promise to make abortion "safe, legal and rare" this year Wallis believes that an Obama administration will be more pro life than a McCain presidency.

If you want Palin stickers send me an email msheath04358@gmail.com
Posted by Rev. Michael S. Heath at 10:09 AM